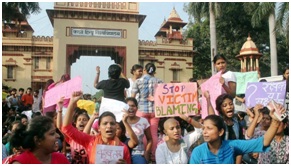 The Banaras Hindu University (BHU) administration is set to constitute a female squad for the security of girl students on the campus. The decision was taken after divisional commissioner Nitin Ramesh Gokarn asked the BHU vice-chancellor Prof Girish Chandra Tripathi to constitute a female squad comprising at least 25 personnel to provide foolproof security to girls. The divisional commissioner has also asked the BHU administration to install CCTV cameras at all girl hostels and various locations on the campus.

“Money for installation of CCTVs on the BHU premises will be made available from the establishment funds of the Varanasi Development Authority (VDA). If more funds are required for the purpose, it will be allocated from Nirbhaya Fund,” Gokarn said. District Magistrate Yogeshwar Ram Mishra had also written to the BHU registrar asking for adequate security to girl students.

After discussing the issue with the BHU VC, Gokarn asked VDA Vice-Chairman Pulkit Khare to ensure installation of CCTV cameras at the earliest. He said no compromise would be made on the security of girls. As many as 22 hostels out of 80 are for girls. Meanwhile, the district administration has asked the BHU authorities to decide a colour different from khaki for the uniform and badge of the security personnel at the university.