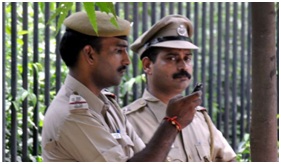 It is not only the stationary cameras installed at crossroads that will identify traffic offenders but also traffic policemen’s cellphone cameras that will send images required for generating e-challan. The project, launched by the Ahmedabad traffic police, is primarily targeted at traffic offences on interior roads and also at illegal parking. Sudhir Desai, DCP (traffic), said that more than 1,500 phones of traffic policemen have been equipped with a special software for the purpose. “The trial runs have been successful and we have started generating e-challans on the basis of the photographs clicked by police personnel and officers,” he said.

Desai further said that that the software has a date and time stamp which will be applied to each image clicked. “It will also have geo-tagging of the location through GPS as evidence for the offender,” he said. Officials of the city’s traffic police said that currently an average of 2,500 e-challans are generated daily by 226 high-definition CCTV cameras installed at over 200 city crossroads. The plan to cover 130 more crossroads under City Surveillance and Intelligent Traffic Monitoring System (CSITMS) project and Smart City project, has already been approved.