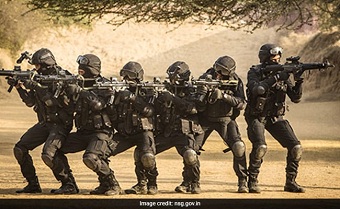 The elite National Security Guard or NSG has undergone a major overhaul by introducing new weapons systems and gadgets. Be it semi-automatic sniper rifles or the world’s smallest spy cam drone, the National Security Guard is now equipped with it. Black Hornet, the world’s smallest spy cam drone is all of four inches in length, but size does not matter when it comes to being lethal. What seems to be a toy, is one of the most deadly assets in the NSG’s arsenal. It has the potential to destroy the enemy within a matter of seconds.

Equipped with three hi-tech cameras, the Black Hornet spy-cam drone “helps commandos scout for danger ahead,” discloses a senior officer of the NSG. The nano drone weighs just 16 grams, but can reach speeds of over 22 miles per hour (35 km/h). It also comes with an in-built GPS device with autonomous flight functions. The Black Hornet Nano is a military micro unmanned aerial vehicle developed by Norway’s Prox Dynamics AS. Apart from India, it is used by the armed forces of the United States, France, United Kingdom, Germany, Australia and the Netherlands.

The Black Hornet is not the only drone acquired by the NSG. During the 34th Raising Day celebrations of the elite force – formed in 1984 – the NSG unveiled an India-made drone called the ‘Kamikaze’. Sudeep Lakhtakia, the director general of the NSG said, “India has lot of talent, which we came across when we were looking for the latest equipment. We decided to go ahead with our home-grown talent.” Technocrats and start-up entrepreneurs under the Skill India Initiative were roped in for the project as safety and secrecy was the prime concern.

He also said that the National Security Guard has “introduced weaponised drones as a part of upgradation process.” The NSG now look to keep improving the drones to be suitable for all terrains, frontiers and mediums. “We plan to have underwater drones too,” he said, hinting at adapting the existing drone for all mediums.

Besides drones, the NSG has acquired new bullet resistant shields – a thin briefcase which is often seen being carried by ‘black cat commandos’ for the protection of the Prime Minister and other VVIPs. Just flick the case open to cover the person who needs to be protected – quite like the umbrellas in the science fiction spy movie ‘Kingsman: The Secret Service’.
With the upgraded equipment, black cat commandos will now have hands-free earpieces instead of bulky walkie-talkies. The fire power of the NSG has also been significantly enhanced, with automatic sub-machine guns from Heckler & Koch. These include the MP5 9mm submachine gun, Glock pistol and Glock knives.

A senior official confirmed that ‘black cats’ have also been armed with the German PSG1 A1 sniper rifle, which carries an enhanced number of 20 rounds to engage and pin down targets for a longer time. It also has a very long range and has pinpoint accuracy. It weighs 7.2 kg and has a telescopic sight.