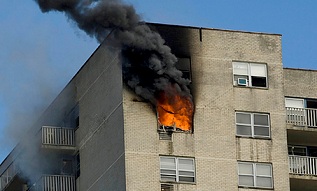 In the absence of any fire safety mechanisms, a majority of Nagpur’s high-rises are potentially dangerous in case of a fire mishap. In April this year, Nagpur had over 2,616 high-rise buildings lacking adequate fire safety measures. This startling fact emerged after the NMC’s fire department conducted an audit of its survey of 3,118 such buildings.

“Of the 3,118 buildings that are 15 metre high or above and have obtained temporary no objection certificate (NOC) during the construction stage, only 502 (16.10%) have complied with the fire safety norms. Similarly, commercial buildings under 15m height failed to adhere to the fire safety norms,” confirmed a senior officer from the NMC’s fire department. The fire department has now decided to initiate action against the violators and plans to issue show-cause notices.

As per Maharashtra Fire Prevention and Life Safety Measures Act, 2006, a builder must procure a fire compliance certificate before the building above 15m height is put to use. Even the development control rule and national building code too stated this as mandatory for any high-rise building.

Sources said fire safety norms had been violated in many high-rise structures over the last one decade which also saw a real estate boom. The town planning department – which is responsible for sanctioning building plans – too has turned a blind eye to the grave violation. Not only private buildings and institutions, even a number of government and private hospitals were also found lacking in complete adherence to the safety norms. The shortcomings were identified in most offices and hospitals – both government and private. In the last couple of years, at least dozens of fire incidents have been reported from different places including hospitals, but fortunately there had never been a fatality.