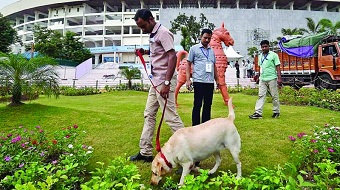 How to check the facial expression of the suspect to identify the movements of a suspect person was all in the special training of more than 500 private security guards who guard more than 20 gates of Jawaharlal Nehru Stadium (JLN) where one of the biggest football events “Under 17 FIFA World Cup” has been scheduled. Police sources say that for the event, more than 500 private guards who are from certified private agencies were given special training which was started a few months ago by the city police.

Apart from special training, the guards were taught basic frisking techniques. A three-layer security which guards the whole stadium protected more than 20,000 people. There is a “no vehicular traffic zone” near the stadium. The whole of South Delhi has been turned into a fortress with several pickets been deployed in the district. Deputy Commissioner of Police (South) Ishwar Singh said that they have heightened the security. Police officials have been deployed at several places and they are on alert.

Police sources claimed that from parks to buildings and nearby areas, several policemen have been deployed to keep a watch. Apart from 16 police stations in south Delhi, police personnel from other 12 districts have been making the security arrangements. Police sources said that for the event a special wireless network has been created in which only calls related to the event will be there. “No other calls will come on that frequency and a wireless set will be with the senior officials involved in the world cup arrangements,” said a police source.