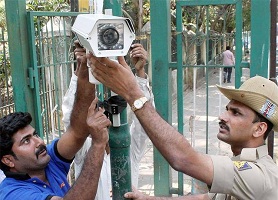 The government is all set to launch the second phase of CCTV installation in north and east Mumbai. Highly-placed sources have informed that the work for installation of CCTVs is nearly complete and the inauguration will happen shortly. Followed by the north and east Mumbai, the third phase, covering central and west parts of the city, is also expected to meet its scheduled deadline of September 2016.

The first phase of the pan-Mumbai CCTV camera surveillance network was launched on November 30 last year, seven years after Mumbai was struck by deadly terror attacks that claimed 166 lives. The first phase covered south Mumbai. “Proud to announce that our government will launch ‘Go Live’ phase-I of Mumbai CCTV network on November 30. It has been pending since last seven years and we completed it in less than one year. The pan-Mumbai surveillance will be launched by the same time in 2016,” chief minister Devendra Fadnavis had said.
Bids to install an average of 14 cameras per sq km were invited in July 2011 onwards but faced repeated hurdles. The successful bidder was blacklisted in January 2012 and then in September 2012, the bidder defaulted on bank guarantees. An open tender got no response in November 2013 and, in July 2014, one of the two bids received was disqualified in technical evaluation. Finally, the L&T-led consortium was awarded the contract.