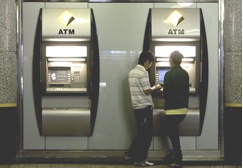 Failure to install CCTV camera on bank premises and ATMs will now result in the registration of an FIR against the bank concerned. This decision was taken at a high-level meeting attended by Delhi Police Commissioner, officials of the Crime Branch, the Intelligence Bureau and the Reserve Bank of India. The meeting also discussed the rising menace of fake currency and the Police Commissioner is learnt to have ordered issuance of notices under section 188 of Indian Penal Code to all banks across the capital. The notice will be pasted in all banks, local police stations and will also be released through newspapers.

“The banks will be given time to install the cameras once the order is pasted on bank premises and we inform them about it through the media. We will give them 15 days’ time once the order is issued and then start conducting surprise checks. If CCTV cameras are not installed by then, we will register a case against the bank concerned,” a police officer said. The cases will be registered under Section 188 of the Indian Penal Code (disobedience to order duly promulgated by public servant).
The punishment for the offence entails a month of simple imprisonment or a fine of Rs 200 or both. However, if the absence of CCTV cameras results in any harm or untoward incident, then the term may be extended to six months and a fine of Rs 10,000 may be imposed.