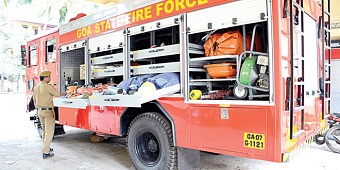 With newer challenges emerging due to changes in the state’s industrial structures and considering lessons and experiences from major and minor fire incidents, the fire department has started the process to propose to the government amendments to Goa State Fire Force Act, 1986 and rules 1997. Under the amendments, the government also aims to ensure that the state continues to have a comprehensive fire safety enforcement framework and the department gets the necessary powers to carry out its mission to save and protect lives and property.

Taking into account changes in the state’s industrial structures and lessons and experiences from major and minor incidents, the department had felt the need to seek amendments to strengthen the operational effectiveness of fire force and raise the fire safety standards of buildings and premises. An official source from the fire department said, “We have received a circular asking the sub- officers and officers’ in-charge of all fire stations to give their suggestions by end of this month for necessary amendments to the act.”  He said that even though the fire department keeps a check on establishments by carrying out inspections regularly, the absence of powers with the fire department to take action or impose fine against violators of fire safety norms is proving to be counter-productive.

Significantly, existing act has a provision to penalise only fire officers if they are found to be guilty of dereliction of duty or willful breach of any provision of this act. However, the act has not prescribed powers to the fire officials to issue fine or punish be it high-rise building owners, occupants, schools or hospital management which have not taken fire preventive measures in their premises. Changes in this Act will increase the penalties for fire safety offences and also enhance measures against those who repeatedly flout the law.