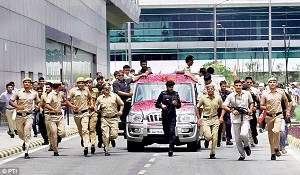 The Bombay High Court has directed the Maharashtra government to “revisit” its policy on providing police protection to private persons. A bench led by Chief Justice Manjula Chellur directed the state to streamline the process to ensure that only those who “deserve” police protection should be provided with it. The bench was hearing a Public Interest Litigation filed by a lawyer seeking directions to the state police to recover dues from VIPs, including politicians and film actors, who have been provided security cover but have not paid the charges for the same.
The PIL claimed that around 1,000 personnel from the state police were deployed for providing protection to private individuals. The plea also claimed that around 600 policemen in Mumbai were deployed for protection duty. Reiterating that the police must not be treated as “private security guards,” the bench said that it’s primary job is to maintain law and order.

“Suppose tomorrow there is an emergency situation. Say, a situation like last month’s floods is repeated and everything comes to a standstill, then, all police personnel will have to be deployed for relief measures. Can these 1,000 policemen also be called for such relief work?” the bench asked. It said if they were not providing protection to private persons, then they could have worked for the public.

“We are not saying that you don’t give police protection at all. But it should only be provided to deserving candidates. The poorest of poor citizens, if he has a security threat, should be provided protection. But there also has to be a review of such protection,” the bench said.“You must re-visit your policy, otherwise, someone will continue to enjoy police protection for his or her entire lifetime irrespective of whether there still is any threat to his or her life. And people who can afford must pay for such protection,” the bench said.
While hearing the above PIL, the bench had also said that such protection must be provided to private persons only in the “rarest of rare cases”.