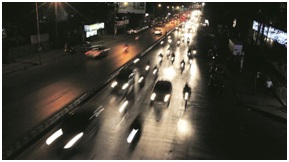 A three-layer audit before new roads are constructed, and star ratings for existing roads in the city are in the offing under Delhi government’s newly drafted Delhi Road Safety Policy.
The policy, which will be sent to Lt Governor Anil Baijal for his approval within a month, describes road accidents as a “public health issue” and lays emphasis on the rights of pedestrians and cyclists, acknowledging that victims of road accidents are mostly people from the poorer sections of society.

The policy states that there will be a road safety audit of all roads in a phased manner, with two years of the policy coming into effect, to identify road engineering and signage defects.
Delhi has recorded over 7,000 annual road accidents in the last two years. In 2016, there were 1,591 fatalities in the city’s roads, of which 42.86% were pedestrians while 36% were riders of two-wheelers. The policy, which will be executed by transport department, aims to bring down accidents by 30% by 2020 and by 80% between 2018 and 2025. Sustainable improvements, the policy says, will be carried out in the road network of by taking necessary actions such as road markings, putting up speed limit signage, warning signs, and redesigning.

“Institute a mechanism to award road safety index or star rating as per global standards for all arterial and sub arterial roads in Delhi based on technical standards of road safety for all road users. It will be done within two years and repeated every three years,” it states.
It also seeks to reverse mistakes of the past when roads largely came up without going through audits, which would have helped mitigate accidents by identifying defects in engineering and signage, most of which are faulty as found by non-governmental organisations.

The policy also talks about “traffic calming” measures to reduce speed in vulnerable stretches leading up to schools, hospitals, market areas, bus and metro stations, among others. “Undertake a benchmarking exercise for speed zoning across Delhi within one year. The designed speed limit on all roads shall be carefully reconsidered and involvement of road experts will be made compulsory in deciding the limit,” the policy says. Once the policy is cleared by the LG, a dedicated and non-lapsable state road safety fund will be created to fund various road safety activities and a software will be developed per the objectives of the national road safety policy, a transport department official said.