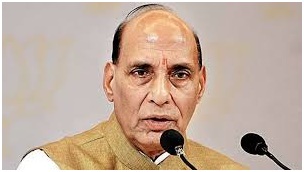 The Ministry of Home Affairs (MHA) has said it had informed the 15th Finance Commission about its budgetary requirement of more than Rs 3.5 lakh crore for internal security and other responsibilities between 2020-25. “The budgetary requirement is meant for internal security, Central Armed Police Forces, police modernisation, border security, disaster management and Union Territories,” a Ministry statement said.

A detailed memorandum will be submitted later to the panel, it said. Home Minister Rajnath Singh held a meeting with Finance Commission Chairman N.K. Singh where the Ministry made a presentation to say that its responsibilities vis-a-vis diverse and varied internal security challenges have increased, even though ‘public order’ and ‘police’ are constitutional responsibilities of the states. “The capabilities of the states alone are not adequate to meet the threats of insurgency and terrorism which have national and international links,” the Ministry added. The MHA said it also faced other challenges like improving the sense of security among the public, making vulnerable sections like women and children safer, meeting cyberthreats and providing immediate relief and rehabilitation during natural disasters.

There is a steady improvement in the overall security situation in the hinterland, northeastern states and Left-Wing Extremism-affected areas due to concerted efforts of the Centre and the states but relentless efforts are needed to consolidate the gains, the MHA said.

The Finance Commission was briefed on various schemes being implemented by the MHA, which require continued capital expenditure, such as modernisation of police forces crime and criminal tracking network and systems, immigration, visa, foreigners registration and tracking, coastal security, border infrastructure, and integrated check posts. Capital investment is also required to make appropriate use of new technologies for cybersecurity and border management, it said.