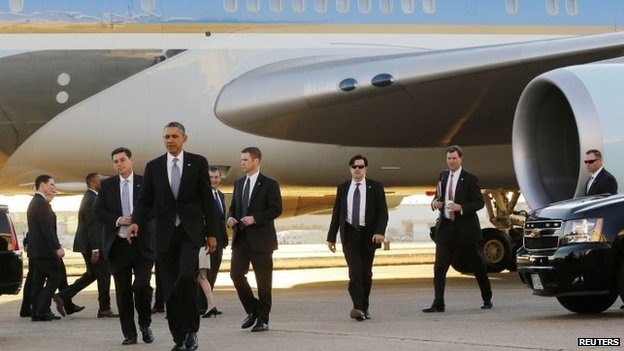 Security agencies of the US along with the Delhi Police, Central Industrial Security Force, Intelligence Bureau, besides air traffic controllers, are preparing a security plan on the ground and in the air for US President Barack Obama, scheduled to visit India this month.

A senior police officer said that Obama’s security team will take over ITC Maurya Sheraton Hotel and seal the place till the President’s departure. US sleuths have already inspected Maurya Sheraton thrice for its proximity to the main road, safety, food and other aspects. The main residential area, food and travel routes of Obama will be the responsibility of the US security team. Delhi Police will look after the area outside the hotel. Though Obama had visited India in 2010, the security this time would be more challenging as he will sit in the open at Rajpath for more than two hours to watch the Republic Day parade.

According to sources in intelligence agencies, several meetings have been held regarding security aspects, including evacuation via an alternate route in case of emergency. Agencies are waiting for the US team that will provide their requirements when it visits India this week. “Last time when Obama visited India, cars of their security officials were not allowed near the runway when the flight was landing. But this time, the rule may be relaxed,” a senior airport official said, adding the Indian government may declare Delhi a no-fly zone till the evening of January 26. Sources said that in the last week of December, intelligence agencies held at least seven meetings. Plans for Obama, including exit in case of a mishap, were discussed. Agencies are in touch with air traffic controllers for secure air passage and alternate route.

A senior police officer said that every building within a radius of two kilometres in New Delhi district will have snipers and commandos. Anti-sabotage checks, security drill and surveillance of India Gate will begin much earlier. According to sources, Obama’s Air Force One flight is loaded with latest and best equipment to deal with any situation, including terror attack.