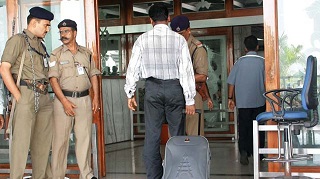 By the end of March, CISF personnel at 59 airports across the country are expected to have miniature cameras fitted on their uniforms, quietly keeping a tab on all that happens around them. The much-awaited Rs. 3 crore project for the purchase of 500 cameras is in the bidding process. The camera, fitted on uniforms of the upper body of Central Industrial Security Force (CISF) personnel, mostly on the shoulders, will record high quality audio and video.

It will greatly help to know who was right and who was in the wrong in the event of disputes between passengers and the security personnel. The gadget will also improve security at the airports as it will film every passenger going through the frisking process — and more.

The step of buying such cameras — each costing around Rs. 60,000 — was initiated by CISF Director General O.P. Singh, who on recently moved to Uttar Pradesh to be the Director General of Police there. “The plan was initiated by him to ensure better surveillance at airports. The device can be checked later for both audio and video evidence,” CISF Assistant Inspector General Hemendra Singh said. He said some passengers engaged in needless arguments with the CISF personnel during frisking and at times even used abusive language or made derogatory remarks.

On top of it, they also lodged complaints against the CISF personnel, accusing them of misbehaviour, Singh said. Absence of evidence at times leads to unpleasant situations.”Now, this camera will allow the CISF personnel to carry out their duties without any fear or hindrance.” Singh said the process of buying these cameras was underway and would hopefully be completed by March-end. The move to install the miniature cameras, a common feature in Western countries, follows a successful three-month trial run conducted by the CISF at the Delhi and Mumbai airports, with three such gadgets at each city.

The trial run, which ended recently, was found to be “very satisfactory and effective” in monitoring and detecting people from close range. Citing the benefit of such cameras, a CISF officer who did not want to be named said: “A passenger got angry with a CISF trooper when he was asked to remove his hat and shoes. But he calmed down after noticing the camera on the body of our man.” The officer said the body-worn cameras on trial helped in reducing arguments with passengers at both airports, much to the relief of the CISF personnel. In the first lot, 500 cameras are expected to be bought — and distributed among 59 major and minor airports all over the country. The CISF is in charge of providing security at all domestic and international airports in the country. CISF personnel are also deployed at the rapidly-expanding Delhi Metro network as well as at leading private and state-run industrial establishments.