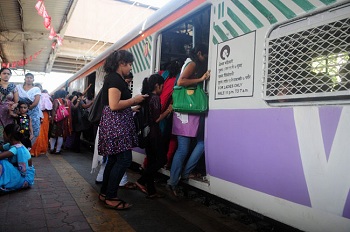 The position of ladies’ compartments in local and passenger trains should be shifted to the middle, a Parliamentary panel has mooted, noting that placing them at the rear of a train posed a security threat to women. The Parliamentary Committee on Empowerment of Women also said that the present strength of Railway Protection Force (RPF) is not adequate for providing security on railway premises and on trains, especially for women, and wanted it to be increased at the earliest to check crimes. Placing of the ladies compartment at the rear end of the train poses real security threat to women as it is easy for a miscreant to enter or escape from the coach after committing a crime, it said.

“In the wake of several cases of crimes against women aboard trains, the Committee has desired that the Railways should reconsider their policy of placement of ladies’ compartments and should explore the ways and means to position it in the middle of trains. In passenger and local trains where pantry cars or vestibules do not pose a technical hitch, the position of ladies’ compartments should inevitably be at the middle of the train,” the report submitted in the Lok Sabha said.

On the issue of RPF, the panel noted that its sanctioned strength is about 76,000 but the current strength is around 55,850. “The Railways have informed that around 17,000 RPF recruits are undergoing initial training at various training institutes and will shortly be available for field duties,” it said. Also, the committee said that to address new challenges to security, RPF personnel should be provided with the necessary hi-tech gadgets and state-of-the-art training.