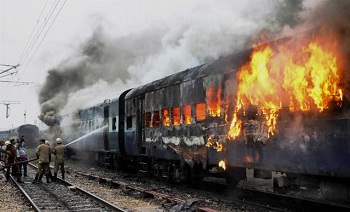 Short circuit, poor maintenance and lack of awareness are major reasons of fire in trains, according to the findings of the Comptroller and Auditor General of India. Besides the audit report found that the automatic smoke/fire detection device in the running trains are not successfully implemented. Though recommendations were made by high level safety review committee and 12th Five Year Plan for introduction of fire alarm system in coaches for early detection of fire, they have not been successfully implemented, CAG noted in its latest report.

A joint survey conducted by CAG and railway officials found that fire prone activities like cigarette smoking, cooking by vendors at stations, carrying of inflammable articles by unauthorised persons, accumulation of empty cardboard boxes and other waste materials were unchecked, aggravating the risk of fire.

It also found that the Research Designs and Standards Organisation (RDSO), the agency responsible for prescribing specifications for fire retardant materials, did not have their own laboratory facilities and the proposal in 2006 to create state of the art laboratory is still in nascent stage.

Besides instances of non-working of exhaust fans in non-AC pantry cars, tapping of power from fan and light through open wires to connect mobile phones, non-maintenance of boilers, wiring system, chimney cooking with flame at the pantry cars noticed during the CAG survey, indicated that these hazards which could contribute to the fire accidents were not adequately controlled.