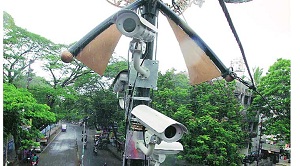 Two days after using drones on the Pune-Mumbai expressway, especially in the Khandala ghat section, to detect 41 lane-cutting violations, the highway safety patrol (HSP) and Maharashtra State Road Development Corporation (MSRDC) authorities have realized their shortcomings. Authorities said live monitoring is required to avoid traffic jams and to book offenders, which fixed cameras on the expressway could do.

A senior officer posted with the patrol said that the cameras on the drones had provided timely feed but many shortcomings had come to the fore. A detailed report will be sent to the road development corporation, the HSP officer said. In the last two days, there was rain and fog in the ghat section of the expressway. “We received poor quality videos and no action could be taken as nothing was clearly visible in the poor weather conditions,” the officer said.

Also, the cameras do not work in poor light. Only headlamps of vehicles were spotted in the video after dusk, the officer added. “The most important issue is of connectivity. It is a hilly region and it takes a lot of time to receive video footage from the drones’ cameras. Meanwhile, vehicles that violate traffic rules vanished before police could initiate any action against them,” the officer added.

After experimenting with the drones, the authorities said fixed CCTV cameras to monitor the expressway would be a better option. A senior patrol officer said the entire Pune-Mumbai expressway has 27 overpasses where CCTV cameras can be fixed and extended arms can help operate the cameras in the ghat section.