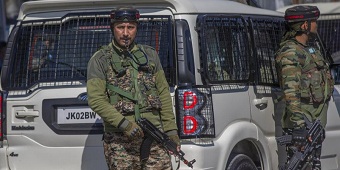 Security officials are concerned with sticky bombs in possession of militants in Kashmir and forces have revised their Standard Operating Procedures (SOPs) and gone on extra alert to deal with the emerging threat. Inspector General of Police Vijay Kumar confirmed they have reports that sticky bombs have arrived in Kashmir.

“We carried out searches to find these sticky bombs in the Valley but so far we have not recovered any such bomb,” he said. It was the first time that a top security official confirmed the presence of sticky bombs with militants in the Valley. “We have alerted security agencies and shared the details with them. I also went to Srinagar airport to show photographs of sticky bombs to CISF men.”

He said they have revised SOPs to deal with the threat. “We have also put our men and officials on the ground on extra alert”. Over a dozen sticky bombs, which can be attached to vehicles and detonated remotely, were seized by security forces close to the border on February 14. These bombs, which are IEDs with magnetic properties, are mostly used by militants in Afghanistan. They have also been used in Iraq.