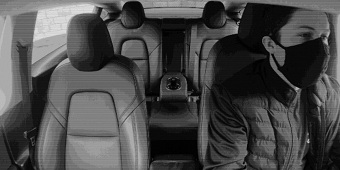 Tesla has started to expand driver monitoring to more vehicles using its driver-facing cabin camera. This is something that many industry watchers have been calling for. Tesla’s approach to driver-assist features has been criticized for several reasons, but a recurring criticism has been the lack of strong driver monitoring capability.

It has been limited to trying to keep the driver’s hands on the wheel while using Autopilot, but Tesla’s wheel sensors can only detect torque being applied to it. Therefore, Tesla can’t even tell if the driver’s hands are on the wheel unless they are actively applying torque.
On top of it, the real thing that you want to be monitoring is the driver’s attention, which Tesla says needs to be on the road at all times, even when Autopilot is active.

The weird thing is that Tesla has had a cabin-facing camera in its vehicles for years now, but the automaker has barely used it. Earlier this year, Tesla finally released its driver monitoring system using its cabin camera.

The automaker started with newer vehicles coming with its Tesla Vision system that powers Autopilot without the use of radar. Now, Tesla started pushing an update that expands the use of its driver-monitoring system to more vehicles and adds a chime when drivers are not being attentive.

Tesla wrote in the release notes:
The cabin camera above your rearview mirror can now determine driver inattentiveness and provide you with audible alerts, to remind you to keep your eyes on the road when Autopilot is engaged. Camera images do not leave the vehicle itself, which means the system cannot save or transmit information unless you enable data sharing. Tesla knows that many customers have concerns about the use of the cabin-facing camera, but the automaker is making sure that you only share what you want to share.