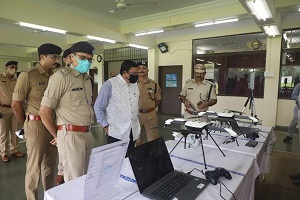 In a bid to tighten the security at railway premises, Indian Railways has adopted the latest technological advancements in the field of security. Recently, the Western Railway zone inaugurated the Infrared Intruder Alarm System at RPF Zonal Armoury, Mahalaxmi as well as launched the first flight of the Surveillance drones at Railway Sports ground, Mahalaxmi.

The Railway Protection Force (RPF) department of the Western Railway zone, with the introduction of these technologies, will get an added advantage to combat and control various issues faced over the Mumbai suburban section. According to Western Railways, the Artificial Intelligence (AI) based Intruder Alarm System operates with seven Infra-Red based CCTV camera feeds. This ensures 360 Degree coverage of the facility.

With Artificial Intelligence based user interface software, the feeds are analysed on a real time basis in order to detect any human presence in the area. Artificial Intelligence is designed in such a way that it will detect only human presence in the set perimeter as well as ignore birds, etc., to avoid false alarm. To alert staff for quick response, the system has an added feature to send distress calls, SMS or Mail to the security control. With quick response time as well as 24 hours coverage with night vision capability, the system will ensure that the area has foolproof security.

According to Western Railways, the surveillance drones will help in keeping a bird’s eye watch on railway assets, disaster management, and crowd management. In case of any emergencies, the drone also called Unmanned Aerial Vehicle (UAV) helps to attend remote areas at a minimum response time. They will be used for real time monitoring of sensitive crime prone locations, yard and remote locations, crowded areas, trespassing locations for better crowd management as well as crime control.

Selected RPF personnel of the division have been trained to pilot the drones. The Unmanned Aerial Vehicle is capable of 25 minutes flight up to a range of 2 kilometres at a height of up to 200 meters from Ground Level. The GPS based auto way point navigation system of Unmanned Aerial Vehicle helps it to perform auto take off, guidance and landing. Besides, it is also capable of capturing high resolution images with a 5X optical zoom camera installed as payload