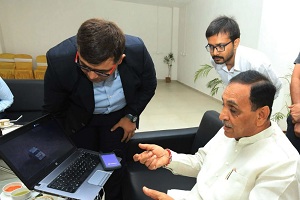 Launching the new surveillance facility in Gandhinagar, CM Rupani said that performance evaluation of various departments was done by the state government and it was found that illegal sand mining was a huge menace. “With the use of technology, especially the Trinetra technology, the Mines and Minerals department, along with the police, will be able to tackle this menace effectively. Our government is committed to its pledge of zero corruption and welfare of the people,” Rupani said at the function.

“We have introduced the “Pocket Cop” application for the police force and this technology has proven to be helpful for both the cops and citizens. Similarly, I believe the “Trinetra” technology will help control the sand mafia,” he added. Mines and Minerals department Commissioner Rupwant Singh said that bidding for all the 686 blocks of the department will now be done through the online process to ensure transparency. “Auction of these blocks for mining purposes will now be done in an online process. Three major limestone blocks in Kutch district were auctioned online last year and in the near future, the state government will earn about Rs 9000 crore in the form of royalty and premium,” he said