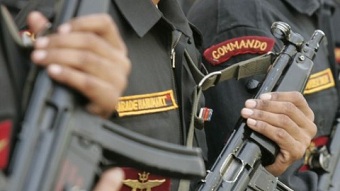 To thwart any kind of terror strikes, UP police is raising an elite fighting force on the lines of National Security Guard. Special Police Operations Team (SPOT) will aim at nipping terrorist activities in the bud. The finance department has already given approval to the project and close to Rs 280 crore have been spent on land and construction of the building. The department has approached Chief Minister Akhilesh Yadav to inaugurate the facility.

The 540 fighters, apart from getting commando training, will also operate with high-end weapons which are so far assigned only to NSG, Force One (Mumbai police) and OCTOPUS (Andhra Pradesh) security personnel. IG ATS Asim Arun, who is supervising the project said, “A total of nine teams will be raised under DIG rank officer. Seven will be deployed at Lucknow facility and remaining two at Varanasi and Ghaziabad. SPOT is being readied to deal with 2008 Mumbai attack like situation.”

Being set up at Anora village off Kanpur road in Sarojininagar, the facility will be spread over 40 acres. Already, 97 commandos have been trained in fieldcraft skills. Inventory of equipment includes high-end arms such as Heckler and Koch MP5 machine gun, corner shot gun, taser gun, holographic sight weapon, thermal scope, under door camera among others. All nine teams will have separate dog squads and 15 canines trained in sniffing out landmines and explosive substances will stay with the security personnel.

Men who show interest in being part of SPOT will have to pass a written exam and a rigorous physical endurance test. As the men will face extremely challenging situations, SPOT personnel will be paid 50% basic salary as incentive every month. The personnel will stay on the compound and get long leave to be with their families. In times of dire need, fighters will be airlifted and taken to the hostile area.