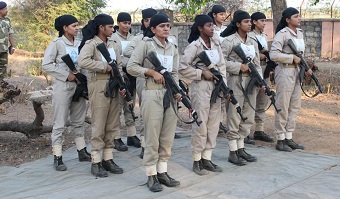 Women commandos will be deployed on 90 new Delhi Metro stations set to be opened in stages over the next year as part of its third phase of expansion. The women have gone through rigorous tactical and endurance training that, officials say, will enable them to tackle extreme threats such as terrorism, in addition to routine roles like beefing up security for female passengers.

The Central Industrial Security Force, the agency that provides the security cover to the Delhi Metro and India’s airports, said women guards were initially hired for frisking duties alone. “But over the years, we felt why should women personnel restrict themselves to frisking?” said a CISF official, wishing to not be identified. “We are now pushing more women into commando training so they have that extra skill to react in any untoward incident,” the source said.

The training includes a Filipino martial arts technique, knowing how to use everyday articles such as pens, belts, shoelaces and keys tactically to take on attackers. We also put them in a jungle with very little food so that they can learn how to survive in such a situation,” the official said, explaining the 11-month process held in centres in Hyderabad and Chennai.

“These women have been given training in special martial art Pekiti-Tirsia Kali as this will allow them to capture attackers alive. Surviving suspects can be interrogated for further leads,” the official added.

The 160 metro stations currently in operation are guarded by 5,000 CISF personnel, of which 800 are women. The force has proposed to have about 3,500 more personnel for the phase-III network, and over 1,000 of them will be women.  “About one third of our total strength will be women. Women’s safety is our priority and well trained women commandos will ensure that the metro system is secured,” CISF Director General OP Singh said.