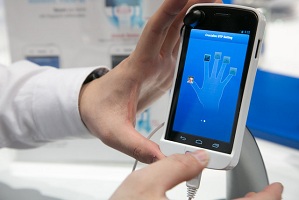 You can lead Americans towards greater digital security, but you can’t make them trust it. That, at least, appears to be the conclusion drawn from a new study from Yougov on behalf of U.S. email portal mail.com. The study involved more than 1,000 Americans over the age of 18. According to recent research, over half (58 percent) of Americans prefer passwords over biometric authentication methods such as eye scans or facial recognition when it comes to keeping their personal data safe.

Given the propensity of many digital denizens to use “password” or “1234” as their protective string of choice, this mistrust is probably something of a problem.
42 percent of survey respondents do not want companies to save and use their personal biometric data, the study finds, and fewer than 1 in 10 participants were confident enough to consider it risk-free. And while some degree of skepticism seems healthy, this seems like a much more pronounced mistrust.

Even as certain biometric methods like fingerprint sensors become increasingly commonplace (with a number of smartphones allowing users to access their contents using a scan of their thumb or forefinger), they’re still far less commonplace than passwords. In fact, just 10 percent of Americans use fingerprint sensors, and as for eye scans, facial, and voice recognition, just 2 percent of survey respondents said that they used each method.

As for why Americans are so suspicious of biometry, the survey shows that 42 percent worry about not being able to access their online accounts in case of a malfunction. Nearly a third of respondents also cited biometric vulnerability as a concern, saying that criminals might be able to access or bypass biometric methods.
“The survey shows that biometric login methods are far from becoming a mass market. Nevertheless, for more security throughout the internet it is very important that alternative authentication methods like biometry are being further researched,” said mail.com CEO Jan Oetjen. “In order to meet the concerns of users, providers have to fulfill high data protection requirements concerning the storage and use of biometrical data.”