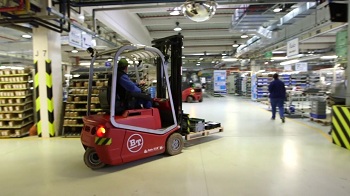 Assa Abloy Czech & Slovakia Rychnov’s operational transformation has been recognised by the 2016 Czech Top 100 Association award for the ‘most admired company’ in the engineering industry sector. Jan Galda, managing director, Assa Abloy Czech & Slovakia, says the recognition is the culmination of a transformation dating back to 2005. The factory is one of the EMEA division’s three high-security cylinder manufacturers. “Today we produce over 8 million cylinders annually, compared with 1.4 million in 2005,” Galda says. “This has been achieved with the same size of workforce – around 500 people.”

Rychnov has employed a Kaizen manager since 2011 and focuses on lean ways of working, operational excellence and sustainability. “In 2012 we developed a production system incorporating these values – improving competence, and with it, quality, with a culture of working as a team,” Galda says. “My own values place teamwork, respect, and a good relationship in a team right at the top. This is vital and I place this above everything else. A strong team with good relationships is a critical success factor in every day’s business but especially in difficult days, which can come as well.”

The overall production system is called 4K, which represents ‘quality, competency, Kaizen and culture.’ In 2012 Galda visited different world class manufacturing centres “to try and capture what was good about them and what we could learn from them. For example, we introduced an ‘escalation’ meeting room – one with no chairs, for short meetings, focusing on real operational factors, to act on priorities.“We have also developed our health and safety culture a great deal. We have clear and strict rules regarding production. Safety is much improved – for example we now have thermal cameras integrated into the plating process to mitigate any fire risk.”