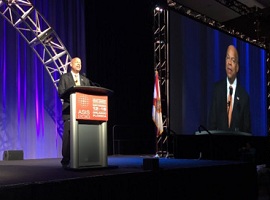 On the day after the 15th anniversary of the 9/11 terror attacks, U.S. Department of Homeland Security Secretary Jeh Johnson addressed attendees at the annual ASIS conference in Orlando where he stressed the importance of the relationship between the public sector and the private security community in helping to keep the nation safe from the new wave of threats that face our nation. While the odds of a terror group pulling off a coordinated attack on the scale of 9/11 are slim today given the improvements that have been made in the country’s security infrastructure and intelligence operations in the years since then, the threat of terrorism hasn’t not subsided and indeed has only grown in complexity.

Johnson, who was at the 9/11 memorial ceremony, said in all of the interviews he took part in at the event that each reporter asked him the same question which was: Are we safer? The answer, Johnson said was “yes” in terms of preventing another 9/11-style attack, however, the same cannot be said of so-called lone wolves or terrorist-inspired attacks like the one that took place in San Bernardino last December or at the Pulse nightclub in Orlando just three months ago.

“We’re now in a phase where we have to be concerned not only about the terrorist- directed stythe most prominent example being 9/11, to now the terrorist-inspired attack,” he said. “This morning before I came here, I went to the Pulse nightclub and it is a reminder of our new threat environment. In this new phase of self-radicalization, the lone wolf, the terrorist-inspired attack is, frankly, harder to detect by our law enforcement community and our intelligence community in advance.”
According to Johnson, security professionals and the industry, as a whole, plays a vital role in helping the government mitigate against the threat of lone wolves and others who seek to carry out similar attacks.

“Our partnership between the public and private sectors devoted to security – the Department of Homeland Security, the FBI, the Department of Defense, our intelligence community, the national security apparatus of our government, state and local law enforcement on the one hand and [security practitioners] dedicated also to public safety and the protection of our homeland in the private sector – has never been more important given our current threat environment,” Johnson told the crowd of attendees. “We must now, more than ever, function as an effective partnership for the good of the people we all serve.”