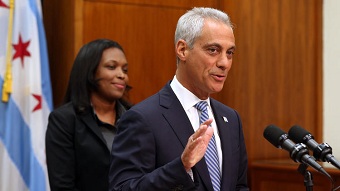 Chicago Mayor Rahm Emanuel is making plans to pick up security guard costs for Chicago Public Schools to help reduce a remaining district budget hole of about $119 million. To do that, Emanuel plans to include $70 to $80 million in spending on CPS security in his proposed 2018 budget that he’ll introduce later this year, spokesman Adam Collins said.

That would still leave a CPS hole in the neighborhood of $44 million, which is expected to be closed in part by debt refinancing, officials said. The state’s newly approved school funding plan gives CPS $221 million in teacher pension contributions and $103.5 million in classroom and special program funding. It also allows the district to hike its property taxes by an estimated $125 million to increase its own pension contributions.

That was more help than expected, reducing what originally was a commitment by the mayor to close a $269 million hole in the budget with “local funding” to the $119 million figure. The increased CPS costs aren’t the mayor’s only concern for the city’s 2018 budget, however. As the city continues to hire more cops, as he promised last year, Police Department costs are expected to rise by $70 million. And even before those costs, there’s an expected shortfall of $114.2 million.