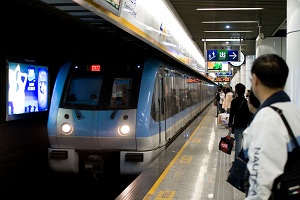 China is opening the new year by implementing real-time, high-resolution 4K surveillance cameras in a wealthy city in the province of Guangdong. Guangzhou’s metro line is now being touted as the first subway system in the world with a surveillance system so advanced real-time footage can be fed to the control room in ultra-high definition quality.

Real-time high-resolution 4K CCTV cameras capable of scanning every inch of the entire transit line have been installed along the 22-kilometer (14-mile) metro line of the wealthy Chinese city. Movements and even the slightest facial expressions of passengers can now be captured and instantly transmitted in clear images.

Guangzhou-based tech firm Nufront developed the technology, which will soon start operation upon the opening of the new metro lines. According to South China Morning Post, the state-of-the-art cameras can also be equipped with facial recognition software, which immediately taps on the criminal database to handle suspicious activity with ease. Such a system, which has been tested on Hong Kong’s MTR, may eventually be implemented for additional security, according to Nufront technical manager Huang Peng.

While transmission of high-resolution video is expected to be a challenge for the existing 4G mobile networks, the company claims its high bandwidths and low-latency technology will make real-time, high-res video transmission possible even on high-speed trains running at 120 km/h (75 mph) or more.

Trains running on the newly built section of Line 14 in the Sino-Singapore Guangzhou Knowledge City Line, are already transmitting ultra-clear surveillance images in real-time without a hitch. The train’s six compartments are each installed with four of the 4K CCTV cameras, with three more set up in each of the two cabins. The technology is considered a major leap as for years, most CCTV cameras installed in trains have been low in resolution and are limited in its scope