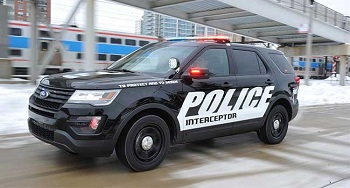 Ford Motor Company will soon be upgrading the doors on its Police Interceptor Sedans and SUVs. They’ll be the first in the U.S. to meet the Justice Department’s highest standard for body armor, the equivalent of a bulky SWAT team vest.

Ford has offered factory-installed ballistic panels on its police car doors since 2008, but the previous versions protected from handgun fire and non-armor piercing bullets. The new doors are designed to stop a .30-caliber bullet shot from a high-powered rifle like an AK-47. That is more powerful than most weapons carried by soldiers.

Ford’s ballistic-panels cover most of the door and include two layers. The outside layer is made from ballistic-grade ceramic tile while the second is made from aramid fiber, which is the same material used for Kevlar. The idea is that the bullet would first hit the ceramic, dispersing energy and breaking the bullet into tiny pieces, then as the bullet passes into the fiber, it will catch the shrapnel. The layers are strong enough to hold up even if a bullet hits the same spot twice, a rare occurrence.
The company started working on the new panels when calls started to flood in, asking for better protection, particularly from the Middle East and Eastern Europe where armor-piercing bullets are a daily threat.