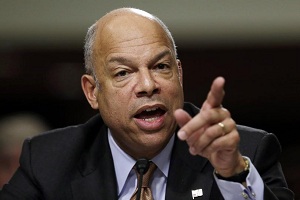 Department of Homeland Security Secretary Jeh Johnson said the threat of “lone wolf” terror attacks has become his biggest fear, saying self-radicalized militants are much more difficult for law enforcement and intelligence agencies to detect. Mr. Johnson, speaking at the Aspen Security Forum, said U.S. and foreign counterterrorism officials have had to adjust to the prevalence of “small scale attacks in increasing frequency,” both in the U.S. and Europe.

He specifically mentioned the December terror attack in San Bernardino, Calif., when a husband-and-wife team killed 14 people at a holiday party, and the mass shooting at an Orlando nightclub last month that killed nearly 50 people. Both of those attacks were carried out by people who weren’t at the time being monitored by law enforcement.

Asked what threat kept him up at night, Mr. Johnson said “the next Orlando, San Bernardino-type attack by someone who has radicalized in secret. I believe that we’re going to be at this for a while addressing this type of event. In homeland security you have to look at all threats, all hazards. Some are high impact but low probability. Others are higher probability, and so we have to prioritize in this way.”
Europe has been rocked in recent months by a number of terror attacks, ranging from bombings and mass shootings carried out by multiple people to other attacks that appear to have been planned and executed by individuals.