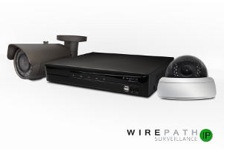 The CCTV and video surveillance market continues to be headed to a “tipping point” in 2014, with revenue for network video overtaking analog for the first time ever in 2014, according to a new report entitled “The World Market for CCTV and Video Surveillance Equipment” from IMS Research. Analog cameras are forecast to continue outselling network cameras in terms of shipments throughout the period to the year 2017, but higher value resides in their rivals.

“Network cameras are generally higher-priced cameras with more advanced features,” says Jon Cropley, principal analyst for video surveillance at IHS. “Therefore, even though less than 20 percent of all cameras shipped in 2012 were network cameras, the size of the market for them in terms of revenue was almost as large as that for analog cameras.” A high proportion of large and enterprise projects already use network video surveillance instead of analog equipment. Now, network equipment is increasingly being selected for smaller projects as well. Furthermore, price competition for analog cameras and digital video recorders (DVRs) is intense, with a degree of commoditization taking place for some product types, providing further impetus for growth where network video is concerned.

Overall, the world market for video surveillance equipment grew by more than 10 percent between 2011 and 2012, IHS estimates. Growth was predominantly driven by sales of network equipment in many countries where analog declined. An exception, however, was China, one of the countries where the analog market continued to grow. “The transition from analog to network video is continuing in 2013,” Cropley says. “This year the global analog space will be broadly flat while the network market will grow by more than 20 percent.”