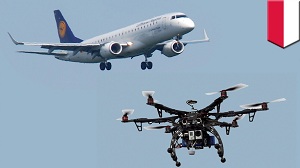 Drones, increasingly popular among the general public also represent a challenge for air traffic and airport security. The British authorities recorded a total of 3,456 collision alerts in their air space last year alone; the detected objects were frequently suspected of being drones. The risk of collision is the not worst-case scenario. The payload of certain drones means they could be used for terrorism purposes, e.g. attacking a plane while it is being refuelled with kerosene. Being able to secure airports and their immediate arrivals against intrusions by drones is becoming critical.

According to Thales airport the solution means addressing the need to detect, analyse and neutralise the drones by tackling the problem with complementary systems. A range of solutions have already been suggested (acoustic, raptors, drones equipped with anti-drone nets, etc.) and some have already been implemented. However, these measures are only partially effective. Authorities taking control of drones certainly is a promising move, but also becomes problematic due to cyber-attack methods. Thales believes that the most effective solution that offers the best course of action is undoubtedly the combination of several cost-effective technologies with the use of deployable systems or ones integrated with airport infrastructures located on the edge of perimeters and/or on elevated positions.

Drones can be detected by radar, direction-finders and cameras. The ideal solution would be to use all relevant systems in a given area (control tower information, transponders, etc.) and merge the data to isolate the identified non-problematic drones from intruders. This duplication of methods is a necessity considering that some autonomous drones do not emit radio waves and can not be traced using direction-finding devices.

The detected drone, and its subsequent neutralisation, could be achieved using various procedures. For drones operated by radio waves, the direction-finder could be used to locate and challenge the drone’s pilot. The most effective solution remains jamming in all its forms (directional, omnidirectional, variable frequency ranges, etc.). Jamming the drone’s remote control can interrupt the flow of data between the drone and its ground station as well as the GPS-guiding system. Jamming the video stops the drone from transmitting its images, hence making the intrusion pointless. However, the law still needs to be changed in the majority of countries – as was done in France in 2016 – so that first-responders can issue a jamming notice for certain perimeters and frequency bands. In the current security situation, Thales suggests that this would make total sense