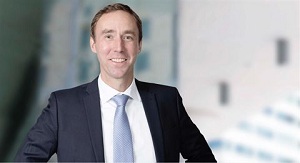 Magnus came to Securitas from Motorola Mobility, a Google company before it was taken over by Lenovo, where he was Corporate Vice President of EMEA and India in Motorola. Before that, he worked 12 years for Sony Ericsson and Sony Mobile Communications. His assignments were, among others, President of Sony Mobile Communications in China for three years, Vice President and General Manager Spain & Portugal at Telefónica and General Manager in Canada.

Magnus Ahlqvist, 43 years old, holds a Master of Science in Economics and Business Administration from the Stockholm School of Economics, and a leadership exam from Harvard Business School. “Securitas is a wonderful company with very competent and engaged people. It is the leading security services company in the world. We have a winning strategy and we are leading the transformation of the security industry, from traditional on-site guarding to a considerably broader spectrum of advanced security solutions and electronic security. It is a great honour and I am very excited about working with all the great people in the Securitas team around the world during this new phase, when we will be driving an even stronger focus on new digital technology in security. Delivering the best engagement and service to our customers is of highest priority during this journey”, says Magnus Ahlqvist.