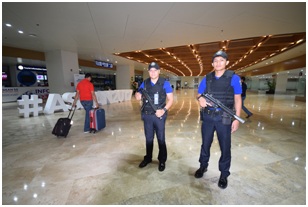 Airport security manning the four terminals of Ninoy Aquino International Airport (NAIA) are now equipped with high-powered firearms, the Manila International Airport Authority (MIAA) has said. There are no imminent threats, however, stressed MIAA general manager Ed Monreal. Monreal said it is better that a security presence is felt as a precautionary measure. He said he authorized the arming of security personnel at the airport in light of the Marawi siege and the recent Resorts World Manila attack by an active shooter.
Monreal said private security commissioned by the MIAA have been armed with shotguns, automatic machine guns and high-powered rifles, and were placed in a buddy system.
The airport’s security personnel also augments the in-house terminal security and vicinity in close coordination with the Philippine National Police Aviation Security Group.

Monreal added that bomb-sniffing dogs also regularly inspect the airport vicinity to ensure that peace and order is maintained. He also appealed to the public to immediately report to the authorities any suspicious person, luggage, or information that concern security matters