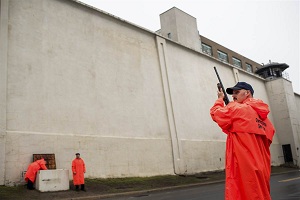 More than $1 million of funding will expand the use of Cellsense technology to all 54 state prisons, Gov. Andrew Cuomo has announced. Since April, these state-of-the-art portable detection systems — used to conduct full-body searches of inmates and screen inmate property — have been placed in 48 correctional facilities. The remaining six will receive them by year’s end. DOCCS spokesman Patrick Bailey told the Press-Republican that Cellsense devices are in use in Clinton Correctional Facility in Clinton County, Adirondack Correctional Facility in Essex County and Bare Hill, Franklin and Upstate correctional facilities in Franklin County.

“This new technology will better detect contraband and serve as a deterrent to illicit activity in New York’s prisons, helping to protect the health and safety of correction officers and inmates,” Cuomo said in a statement. “We will continue to ensure our correctional system has access to the resources and the tools they need to improve the safety and security of our facilities.” The technology strengthens the State Department of Corrections and Community Supervision’s efforts to crack down on contraband and weapons inside the prisons.

Staff can easily move and even hide Cellsense devices, improving their ability to find illegal items and allowing them to search more inmates in less time, according to a Governor’s Office press release. At Green Haven Correctional Facility in Duchess County, Cellsense alerted staff to an inmate later found to have ingested a razor blade wrapped in electrical tape. An object like that is often undetectable by traditional means, given how it was wrapped and hidden in the body, the release said. “Contraband is an ongoing issue and poses a danger to both staff and inmates in our facilities,” DOCCS Acting Commissioner Anthony Annucci said. “DOCCS’s increased use of technology, such as Cellsense, builds on Governor Cuomo’s commitment to deploy new technologies to improve safety in our prisons and offices and is something we as a department are grateful to have.”