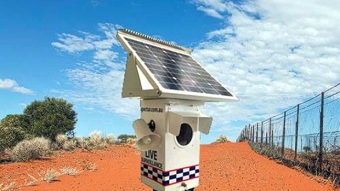 A Perth start up has completed trials of wireless security cameras that don’t require mains power, communications cables or even a light source to work effectively. Described by the company as a “computer with a lens,” Spectur’s Thermal Camera Detection System utilises camera units powered by solar panels that use thermal imaging to see in the dark and support live stream video with everything linked through cloud computing.

Its wireless security camera designs have been put through their paces during field trials with an unnamed international freight and logistics company, and Spectur’s Managing Director Peter Holton said the system stood up well. “Thermal camera field trials have now extended to cover additional new and existing tier one customers and we see applications for this technology across a broad range of industries including military, logistics, critical infrastructure and the rapidly emerging market of high value crops,” he said.

“We are already working on international product approvals and are building our systems and processes to be in a position to focus on international commercialisation” The technology is said to have a range of 300 metres, with thermal images able to be taken in total darkness.

Spectur’s designs are aimed at protecting large perimeter fences such as farms and construction sites, all without needing the usual infrastructure to support them.
The company said it’s aiming to launch thermal camera detection systems in Australia commercially very soon and begin distributing in July. And once that’s done, Mr Holder said the Perth-based company will seek to expand to international markets. “Sales of our thermal camera detection systems in Australia and in overseas markets have the potential to be a significant driver of the Company’s revenue and growth into the future as thermal technology achieves higher value sales than traditional systems,” he said.