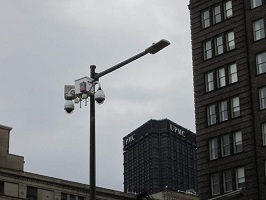 The Pittsburgh Public Safety Department plans to spend $5 million to improve its citywide system of surveillance cameras and expand it by 30 percent, officials said. City Council gave preliminary authorization for a three-year, $1.25 million contract with Milwaukee-based Johnson Controls to cover software upgrades, maintenance and replacement of most of Pittsburgh’s 225 surveillance cameras. Public Safety is preparing a 2018 capital budget request for an additional $3.8 million that would be used to purchase and maintain about 75 additional cameras, according to Director Wendell Hissrich.

“In most cases, these cameras have never been replaced (since purchased in 2007),” Hissrich said. “That’s 10 years. They’re past the end of their life expectancy.” Hissrich declined to provide specific locations for cameras, saying only that they’re in all city neighborhoods. Pittsburgh has 90 neighborhoods, including Downtown. He said cameras would be added in neighborhoods where crime rates are high.

Dan Shak, manager of technology for public safety, said the new cameras will be wireless and have the capability of panning. They can also be linked to a gunshot detection system, now exclusively in the Homewood area, which the city hopes to expand to other neighborhoods. The cameras will send a notification when one is inoperable. Pittsburgh has experienced numerous problems with camera operations. Hissrich said 27 to 32 percent were not operating correctly when he was hired a year ago. He said 99 percent are now working. Pittsburgh has immediate access to an additional 50 cameras owned privately and can request video footage when crimes occur from hundreds of other cameras at private businesses and the Housing Authority of the City of Pittsburgh.