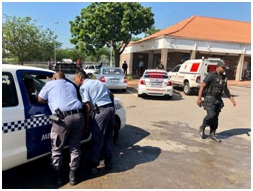 The South African Police Service and private security company Fidelity ADT are on a mission to send a message to criminals that combating crime is not the state’s job alone. Recently, the partners conducted operation “clean-up Sandton”, visiting crime hotspots in the area.
National reaction manager for Fidelity ADT Ivan Shore said the purpose of the operation was to tackle the high volumes of crime in the area.

“We have a big footprint in the area and thought it would be productive to work together with the police to clean up the area,” Shore said. During the operation, vehicles patrolled the streets where high rates of house robberies were reported. Some of the areas included Bryanston, Woodmead, Morningside and Paulshof, all in the north of Johannesburg.
The team also did a search operation at several shacks on Witkoppen Drive, between houses and apartments worth millions of rands as well as a Porsche dealership. Locals looked on curiously as some of the armed private security officers went from door to door.

The officers managed to confiscate three crates of beers from a house that sold alcohol illegally. No one took ownership for the alcohol, but one angry woman shouted: “You are taking our bread money. It is just beers and now our kids will suffer.” A man in the background was heard saying: “You can’t just come in here and take from us. We survive on the little that we get.” A man was arrested during a separate search operation on a riverbank near Riverside Park where a group of people have put up makeshift washing lines, built fire places and homes made out of cardboard.

Head of the visible policing unit (Vispol) in the area Colonel Stanley Sibitane said involving security companies in combating crime in the area was a good strategy. “They (private security companies) are availing themselves to something that we will use for future.
“Today was a show of force and the criminals out there can see now that the security companies are on board in crime prevention.” Sibitane said the Sandton area was plagued by the three specific crimes: house robbery, hijackings and business robberies. He said smash-and-grab attacks during traffic along the busy William Nicol Road were also one of the area’s biggest problems.