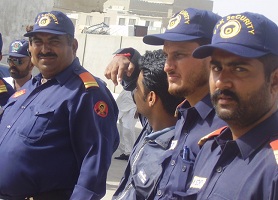 The Khyber Pakhtunkhwa (KP) Directorate of Labour has directed an inspection team to regulate private security companies under the labour laws. In a meeting, the labour director asked the team to make ensure the companies follow the labour laws and provide incentives and salaries to their employees. The decision to this effect was taken after the directorate received various complaints about non-payment of salaries and incentives to several employees working with different security companies in the province. He asked the team to make ensure eight-hour duty duration with one-day leave per week for the employees as per the labour law of the country.

“If any private security company is found guilty regarding provision of monthly salaries and other privileges, the department would cancel licence of the company,” he warned. Meanwhile, three security guards; Rehman Ullah, Abdullah Jan and Amin working with a private security company told Daily Times that they were not being paid regularly and had no other incentive such as medical and annual leaves. “Whenever we ask the company to give contract letter, we are told either to quit the job or continue working without the contract,” said Abdullah Jan, who is working with a security company for over two years. Rehman Ullah, working as a security guard at a private cellular tower, said that he was working without any incentive and did not receive salary regularly. “Our duty time is not specific, we perform our duty in two shifts but have no monthly incentive and regular salary,” he regretted.