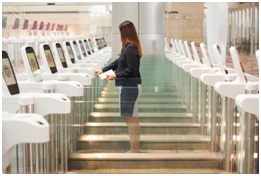 Singapore’s Changi Airport, which has been voted as the world’s best for the past six years by Skytrax, is planning to build an entire terminal that employs automation. To enable this, the airport is aiming to appoint a series of bots that get to work right from the time of a plane’s landing to the point of deplaning of passengers. Inaugurated last October, the airport’s Terminal 4 is going to act as an experimental facility for the automation process. The idea is to replicate the established automation on the Terminal 5, a much bigger facility currently under-construction to cater to an estimated footfall of 50 Million passengers annually.

An insight into the automation indicates that the traditional control tower at the airport will be replaced by an arrangement of cameras and associated technology to detect and monitor any aircraft about to land. Passengers then deboard through a laser-guided aerobridge. In parallel, some automated vehicles unload the baggage while others deliver robot-packed meals and processing cargo. Once the passengers are off the plane, they head to automated immigration turnstiles equipped with face-scan and thumb-print. Baggage bots deliver the baggage to the carousel which is then collected by the passengers. A driverless taxi can be boarded post exiting the area.

Essentially, the automated machines currently under development to make the entire idea a reality include a remote-controlled vehicle to transfer luggage from a plane to the baggage handling area, an autonomous electric vehicle to transport documents for air cargo and even autonomous aerobridges that use lasers and cameras to align to the plane door.