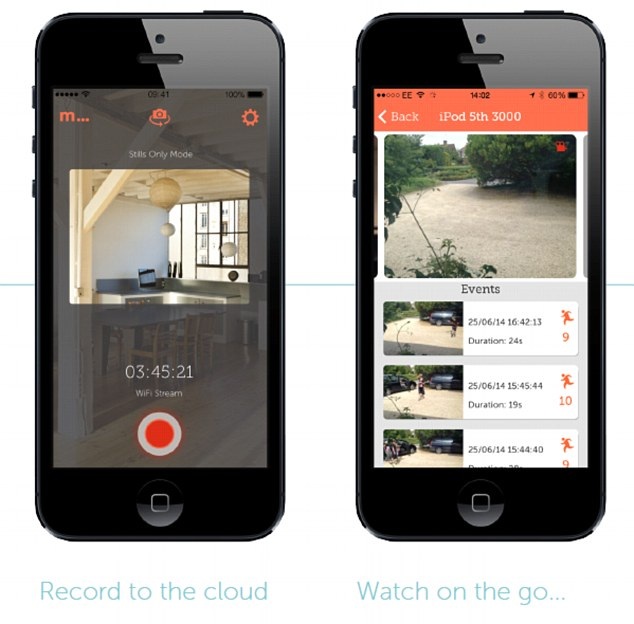 A burglar alarm is a powerful deterrent, but if a criminal isn’t scared off then you need as much information as possible to help catch them. Now an app is helping police solve break-ins in both the UK and US by transforming disused phones into DIY CCTV cameras. The software is free providing only one camera is used, but it does require homeowners to have two iPhones – one to record any action and one to monitor the house remotely. Users receive a notification, including a live video feed if the app detects any movement in their home.

‘We analyse all the pixels in the image every half a second and work out if anything has changed [to detect motion] a spokesman from the app said. ‘It’s done using a grid so that users can select which areas of the scene they want the motion detection to be active for.’

An iPhone running the Manything app automatically filmed him rifling through the property, enabling the police to use the video to track down and convict the thief.
Manything is a video monitoring app that lets users re-deploy spare iOS devices as video monitoring cameras.  It requires users to have at least two iPhones – one to record any action in a house, and another to monitor the house remotely.

Users place the house-bound phone so its camera is trained on an entrance, or an item they particularly want to protect. They can choose ‘motion detection zones’ to mask out areas they don’t want to trigger alerts, such as a cat flap. The device starts recording if the camera sees any movement. If a burglar is detected, a notification is sent to a homeowner, who can see a live video stream of their home on the ‘other’ iPhone. They can also log onto the company’s website to check for footage.  Meanwhile, video clips are instantly stored in ‘the cloud’ on a rolling basis. This means that if a thief steals the smartphone in the house, the evidence can still be accessed.