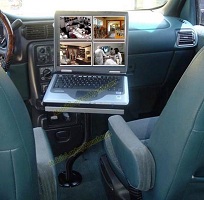 North America and Europe are expected to hold the largest market share and dominate the vehicle surveillance market between 2016 and 2022 owing to the presence of major automotive players such as General Motors, Ford, and Chrysler. Moreover, the U.S. is one of the largest end users of passenger cars and commercial vehicles. The changes in buying pattern, positive trends in the economy growth, and growing awareness toward driver and vehicle safety are the factors which are encouraging the growth of the in-vehicle  surveillance market in Asia-Pacific.