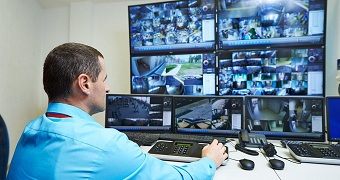 Jon Cropley, senior principal analyst, video surveillance, at IHS Markit, says that the world market for professional video surveillance equipment grew by 9.3 percent in 2017. This is a much higher rate of growth than in 2016 (3.9 percent) and 2015 (1.9 percent). Increased government spending on equipment to fight crime and terrorism was a major factor in this growth, as was private sector spending on replacing equipment in retail and commercial installations.

Increasing demand for security cameras is expected in 2018, but a slightly lower of level of price erosion is also forecast. The combination of these factors will lead to 10.2 percent growth in the video surveillance equipment market, which will reach $18.5 billion in 2018.
Global demand for security cameras grew rapidly in 2017, but average prices continued to fall. Nevertheless, revenue grew in most countries. Two of the fastest-growing country markets were Brazil and India. A major factor behind the growth in both countries was increased spending by private retail and commercial organisations on HD CCTV systems used to prevent crime.

In addition to the above, Cropley’s analysis found that although it remains highly fragmented compared to many other markets, the supply base for professional video surveillance equipment is gradually becoming more concentrated. The top 15 vendors accounted for 62 percent of global revenue in 2017 and 62 percent of all security cameras shipped in 2017 were network cameras. He also reveals that deep-learning-enabled recorders and servers, a new category this year, are an important element in powering what many expect to be the next generation of video analytics using artificial intelligence. They accounted for just 1 percent of global market revenues in 2017.