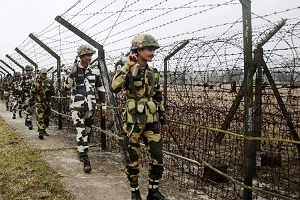 The first ‘smart fence’ pilot project to plug vulnerable gaps along India’s borders has been rolled out in Assam on a riverine stretch with Bangladesh, the Border Security Force chief said. The project is a part of the Modi government’s ambitious plan to completely seal the India-Pakistan and the India-Bangladesh borders in the next few years. It is called the comprehensive integrated border management system (CIBMS). Border Security Force Director General KK Sharma said that the maiden testing of technical surveillance and alarm gadgetry was recently operationalised on the 55-km-long stretch in Dhubri, across the Brahmaputra.

“The rolling out of the CIBMS pilot project has been initiated recently in Assam’s Dhubri area. This is a riverine border area and hence no fence could be erected here,” Mr Sharma said. At present, BSF troops use speed boats to guard this patch, which is highly prone to illegal migration and cattle smuggling due to the changing course of the mighty river.No permanent structure – like border posts – can be erected in the area.

The Director General said a similar project will be launched this month along the India-Pakistan International Border, in two stretches of 5 km each, in Jammu. The technology being tested in the Dhubri region is a mix of surveillance and warning systems, he said, adding, he would not want to go into details about the devices being deployed.

The BSF chief said more than “2,000 kilometre of the border” along Pakistan and Bangladesh will be brought under the ambit of the ‘smart fence project’ – that uses infra-red cameras and radars – out of the total of a little over 6,300 km of the two borders it is tasked to guard. In fact, on the Pakistan side, we may go in for CIBMS even at places where we have fencing because we would like to be doubly sure. Roughly, about 2,000-plus kilometre length on both the borders has been identified as being vulnerable or as being without fence where we need to implement the CIBMS in the days to come.

“This rolling out process for the entire distance of 2,000 km will take about 3-5 years time,” he said. When asked if the force was not able to get the “required technology” to plug these vulnerable gaps on the two frontiers, prone to infiltration and smuggling of arms and drugs, the Director General said that was not the case. “No, it is not like that. All this technology is available. The problem lies in integrating all these things. Integration of all these gadgets and bringing all these on the same platform and then taking a common feed to the border out post, that is the challenge,” he said. Mr Sharma added that once a software is created which integrates all these things, then the BSF personnel sitting in the border post will have a picture which is shown on a monitor and the gadgets and technology will be “guarding the border for us and if something is amiss, an alarm will be created.”