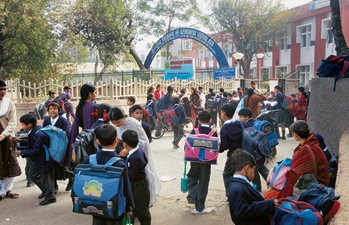 The Peshawar terror attack has sharply brought the focus on security of schools with all states being asked to beef up security measures, but the larger worry is that police simply do not have the numbers to guard every single school. This is expected to further trigger the demand for private security for schools, home ministry officials said.
They also said it was only realistic that schools should hire private security while police can station PCR vans near schools. “The police can definitely help the schools by training these private security guards in a better way, like keeping gates of school shut while school is on and only allow entry to bona fide school personnel”.

Rituraj Sinha, promoter of one of the country’s largest private security players, SIS Group, in fact admitted that demand from schools for private security had gone up manifold in the last one year — both in terms of asking for more manpower for access control and patrolling, and sophistication in terms of more CCTV systems and live monitoring of cameras.

He said private schools had enhanced their security requirements, especially after the sexual assault case involving a student of a reputed private school in Bengaluru. “The focus has increased on electronic real-time vigil by CCTVs,” Sinha added.

Ramesh Iyer, Chairman of TopsGrup, said that many reputed private schools in Delhi, Mumbai, Bengaluru and Pune had approached them for security solutions, specifically post the Bengaluru rape case. “We are providing a complete security solution to many private schools, which include guards for access control, a CCTV system with command and control system for monitoring and also conduct background checks of teachers and other staff,” Iyer explained.

Sinha said many private schools have already enhanced security standards by insisting on the private security agency to also provide school buses as well as verified drivers and guards for the same. “There is also demand to fit school buses with GPS systems for monitoring,” Sinha said. After the 26/11 attacks in Mumbai, RK Puram, East of Kailash and Vasant Vihar branches of Delhi Public School had written to the Home Ministry seeking CISF security cover, but it was turned down due to paucity of security personnel.