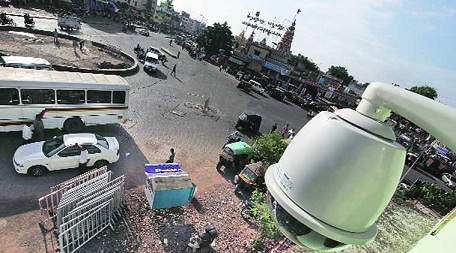 Come February, all popular areas of Bengaluru will have a strong surveillance with the police set to install over 3,500 CCTV cameras across the city. The police seem to have learnt the importance of CCTV the hard way, as officials investigating the Church Street blast have been struggling for clues in the absence of any footage from the blast site. The Centre has approved the city police’s plan for a 24×7 surveillance across Bengaluru under the Mega City Project, Additional Commissioner of Police (Traffic), B Dayananda said.

They are currently preparing a list of vantage points and popular spots under each of the 104 police stations in the city for installation of cameras. Each police station is expected to seek 25-30 cameras. For instance, Wilson Garden police have sought 25 cameras, while Koramangala has asked for 30.

By the time the requirements of all police stations reach the higher-ups, the number of cameras needed is likely to cross 3,500. “We are still getting the lists from some stations. We will be able to get the exact figure once the comprehensive list is completed,” the officer added.

This is a major shift in the police’s focus as they were hitherto only trying to get private establishments to install CCTV cameras outside their premises. The change came about after police found no CCTV cameras around the blast site on Church Street even though it was a popular place.

“We are seeking information from police stations on the localities that require CCTV cameras. This is a long-term project. But we are determined to have CCTV cameras on major thoroughfares and prominent spots of all localities. Our CCTV cameras together with those installed by private businessmen and establishments should be able to cover most of Bengaluru,” Dayananda said.