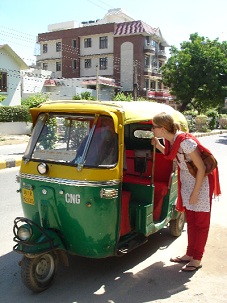 In a move that will benefit auto-rickshaw drivers in the city but may lead to the harassment of passengers, the Delhi government has decided to curtail the powers of Delhi Traffic Police to impound autos and taxis for minor violations. The Aam Aadmi Party (AAP) during its previous 49-day tenure had initiated the process to limit the powers of the traffic police but after they quit, the order could not be implemented. The common people, who often seek police help to handle errant auto drivers, will not get any help when such an order is implemented.

The issue was discussed in a meeting of the State Transport Authority (STA) chaired by Transport Secretary and Commissioner, Gitanjali Gupta, and it had been decided that they would implement this order. “Traffic police will continue to seize autos or commercial taxis and issue challans for offences such as driving without license, fitness certificate or permit,” said a senior Delhi government official. According to officials, due to lack of manpower, the Delhi government had transferred some powers to the traffic police under rule of 66/192 A to seize vehicles in case of overcharging, refusal to carry a passenger, driving without PSV badges, improper uniform, and misbehaviour by drivers.

“Now, the government has reviewed its decision. To reduce harassment of auto drivers, the government has decided to withdraw the powers. In case of minor violations such as refusal, driving without uniform or PSV badges, traffic police cannot now impound autos and taxis. However, they can still challan the vehicles in such cases,” said the official.