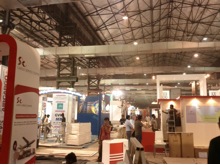 Incidents of theft at Mumbai’s Chhatrapati Shivaji International Airport’s cargo terminal have reduced drastically following the installation of over 650 CCTV cameras, said the Central Industrial Security Force (CISF). The agency also uses their personnel as undercover loaders to regularly keep a watch. The CISF, given charge of securing the cargo terminal in 2011, says the last theft took place in April. According to Mumbai Police, no more than 10 thefts have been reported in the past year, most of them inside jobs.

The Airports Authority of India (AAI) installed cameras after a series of high profile thefts between 2007 and 2009. In May 2009, an airport security personnel was killed while attempting to stop four armed men stealing gold and silver coins bound for Pidilite Industries in Hyderabad. The CISF has access control to the terminal and also guards the perimeter. Officers say the CCTV cameras help keep an eye on airport staff as it is scanners, loaders and forklift operators who are most commonly involved in cases of cargo theft and are part of active gangs at the terminal.

The CISF has also sends men undercover. “We have had success with undercover operations. During each shift, a few of our men work at the cargo terminal. They wear the same uniforms as other employees. We attempt to apprehend the accused on the airside to avoid a tussle of jurisdiction with local police,” the officer said.

With over 1,000 employees working inside the cargo terminals during each shift, police say it is important to keep a watch on them at all times. “No employee is hired before thorough police verification,” said Madhukar Sankhe, assistant commissioner of police, airport division. While the terminal is not a specific terror target, security personnel remain on high alert. “Along the perimeter, we keep a watch for Improvised Explosive Devices (IEDs) that can be placed in abandoned baggage. The X-ray devices show any arms or ammunition that may be concealed in the consignments,” said CISF commandant Sunil Kumar Sinha.