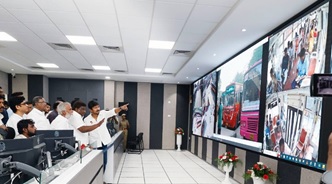 Tamil Nadu Minister for Youth Welfare and Sports Development Udhayanidhi Stalin recently inaugurated the Integrated Command and Control Centre (ICCC) and also the installation of cameras and other safety equipment onboard Metropolitan Transport Corporation (MTC) buses, at terminuses and bus stops. The event took place at the MTC headquarters in Chennai.

Transport Minister S S Sivasankar, Hindu and Religious Endowments Department Minister P K Sekar Babu also participated in the event. According to the officials, under the central government-sponsored Nirbhaya Fund, Rs 72.25 crore was utilised for the installation of the safety equipment in the buses to ensure the safety of women and children.

Stalin had launched the first phase of the project by installing the CCTV cameras in about 500 buses. Now, in the second phase, a total of 1,830 MTC buses were equipped with CCTV cameras, mobile network recorder, panic buttons, loud speakers among others and as many as 63 locations, including bus stops and terminuses, have been fitted with cameras.

The two-storey ICCC building, which was set up at a cost of Rs 4.72 crore, will act as the centre point and will be responding immediately when a panic button is pressed. If an emergency situation occurs, if a panic button is pressed, it will alert the driver, conductor and the passengers through the loud speakers installed inside the buses and soon, an alert will be passed on to the command centre. The system has been set up in such a way that once the grievance is confirmed, it will further intimate the Greater Chennai Police control room.

The ICCC has a giant video wall and 16 computer operators would be monitoring the movements. In each of the buses, there will be a mobile network video recorder, three CCTV cameras, four panic buttons and a loudspeaker, a statement said.