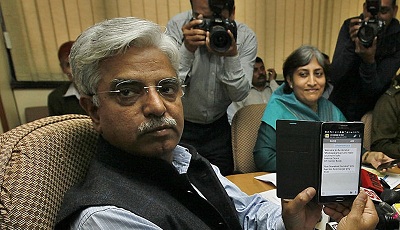 Delhi Police Commissioner B S Bassi has launched ‘Himmat’ Whatsapp and Hike groups for women’s safety that will assist the force to effectively communicate with women in need of help. The facility will be available on mobile number 8800001091.

Women travelling by public transport can now send photographs and other details of the vehicle to the police before boarding it. “Women in Delhi can now send us photos/details of the taxi/auto they are boarding and other details. This will boost their confidence and serve as a deterrent for errant drivers. Women can also send distress messages during emergencies,” Bassi said.

The details could be sent in the following format: passenger name, boarding vehicle (TSR/Cab/Taxi), from ——— to ——- and the vehicle’s registration number. The number is integrated with the PA-100 system and if an emergency is reported on the group, the nearest PCR MPV will be rushed to the spot, police said. The Delhi Police chief also said that they have urged both the Centre and the State governments to introduce self defence programme for girls in school curriculum.

More than 30,000 users are availing the ‘Himmat’ mobile application which lets women send SOS signals to alert the Delhi Police control room. And, 5,360 have registered themselves with the Delhi Police, he said. “In all, total 1,589 SOS messages were received out of which 1,029 were from Delhi,” said Bassi.
The app, which is currently available only on android platforms, will soon be made available on iOS and Windows smartphones. “Those who do not have a smartphone can call the police on the 1091 helpline. Last year, we received 72,930 calls on the women’s helpline,” he said.