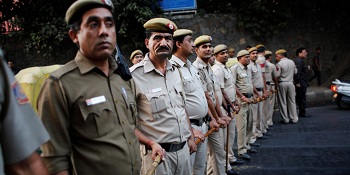 Delhi Police are set to add more than 15,000 constables to the force which is currently in the middle of a power tussle between the Centre — to which it reports — and the Delhi government.“The home ministry is working on a cabinet note to get necessary approval for the creation of 15,000 to 20,000 new posts of constables in the Delhi Police. Final discussions are being held on the exact number of posts and the period within which the new posts will be filled,” a senior government functionary said.

The Delhi Police have a total sanctioned strength of around 84,500 but are short-staffed with only close to 77,600 of these posts filled. Of them, around 44,000 are constables. The shortage in ranks became evident last week when, busy with security arrangements for the India-Africa summit, the Delhi Police could not spare a single officer to escort the Uber rape case convict to court for sentencing.

The proposal, if implemented, will increase the constabulary strength by 35-40%, giving the force more boots on the ground. A significant number of these posts are likely to go to women, in line with the government’s plans to bring their representation in the force to 33%. According to data submitted in Parliament this year, Delhi has 381 police personnel for every one lakh residents. Though higher than the India-wide ratio of 139 and well within the United Nations’ standard of 220 to a lakh, the Capital falls behind New York (417) and Washington (612).